That's Not Really What It's Used For! 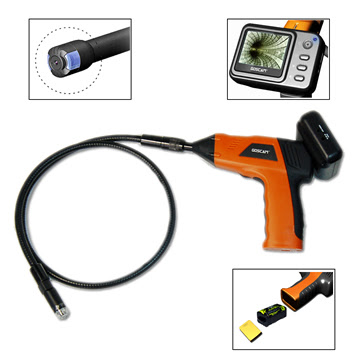 Last year the institution broke down and bought a couple dozen "snake cams", or inspection cameras, for use while searching.

They have about an 18 in probe with a camera lens on one end and a video monitor on the hand held part. Great for looking under things and in holes in the walls and above the ceiling tiles and stuff. All.... or almost all of the tight little hidey holes that inmates like to stash stuff that they don't want found.

I'm sure you know where this is going...

The other day Woodman was down in laundry checking out their snake cam. One of the new square staff came up and said "Hey! What's that thing for?"

Being the consummate deviate that he is, Woodman said "If we think an inmate has stashed something in his butt, we can just run this sucker right up in there and see what he's hiding!" And to demonstrate he held the camera end up and kind of ran it up into the air.

The poor woman turned white and said "Oh my Gawd! That's disgusting!" Then she ran off to tell one of the other ladies what he was doing.

He was still laughing about that a couple of days later.

And a couple of days after he told me about it, I'm still laughing too.

By now I'm sure you have realized that kind of humor tickles me.

It's a sick profession.

But you laughed too. I heard you.

Labels: a peek inside