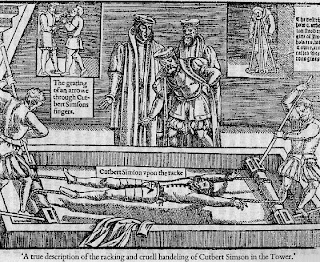 I just spent an hour or so looking at news articles and reports about segregation units in prisons all over the country. It's a little disturbing. Articles put out by prison officials proclaim the units as a tool for enhancing safety of both staff and offenders by segregating particularly violent or recalcitrant offenders from the others to ensure a smoothly functioning prison. Those offenders who are violent, disruptive or are known trouble makers, as in local gang leaders are placed in the segregation unit to prevent or at least hinder, their ability to disrupt the prison routine. They espouse safety, safety, safety.

But if you read an article written by someone who is not working for the DOC or by an ex-inmate, or a religious group, or a sociologist, or any of the myriad "civil liberties" groups, then you are told that segregation units are nothing more then medieval torture chambers where innocent offenders are thrown arbitrarily for indeterminate amounts of time and deprived of all of the basic human rights and allowed to suffer indiscriminately. They all cry cruelty and callousness and torture and racism.

Why do we have segregation units? A good question. A better one would be: why do we have prisons? We have prisons for people who cannot or will not follow the rules that society has set down that we all must follow. Kind of like the ten commandments, but with a more immediate jeopardy attached. If you break one of the commandments, you will go to hell when you die. Eventually. When you break one of society's rules, you will go to prison a bit sooner. Sometimes.

And when you break the rules of the prison, then you go to the segregation unit. It's simple.

And they have limited access to recreation and phone calls and laundry and food and entertainment because it is being used as a punishment! Not just because we don't like them.

The nay-sayers and the bell ringers and the civil libertarianists all cry that segregation units are unfairly used against the mentally ill and the functionally illiterate and the non-whites. Well, if you will look at the numbers behind the numbers of mentally ill and functionally illiterate people who are incarcerated you will find that a surprisingly small percentage of them are in segregation units. And as far as racial levels are concerned, our unit has usually been higher in white offenders than non whites.

But I know where that comes from. That card gets thrown in my face on a daily basis.

They play that card every time they don't get their way. I get accused of being racist or elitist or stateist or americentrist or whatever-ist when I won't give them special privileges because of whatever imagined special status they can imagine. But nobody ever has the guts to say "You're treating me like an a**hole because I act like one!"

So what if we didn't have these segregation units? What if we just let them do whatever they wanted to inside the prison fence?

Have you ever seen "Escape From New York"?

And what happens to Mrs. Browns little boy who gets sent to prison for writing bad checks "He's not a bad boy, he just fell in with the wrong crowd. I don't know why they had to send him to that place! It's so unfair!" and he gets robbed and beaten and raped and killed inside the fence? Then where will the outcry be?
"Why didn't they protect him?"
"How can they let people like that free to hurt others?"
"Why doesn't somebody do something about this horrible situation?"

And then we'll be right back where we are now.

It's not a perfect solution. But it's the only one we have to date.

You think you can do it better? I'll take a few weeks off and you can come have my spot. Let's see how you move. Ten to one you get your nose broken inside of a week. At the least.
Posted by JustRex at 9:20 AM