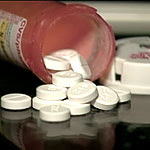 I remember back when that phrase was a catchword for the hippie movement. It was probably one of Timothy Leary's brainchildren. Now in my job it's merely a fact of life.

I believe that if we took all of the prescription medications consumed in a day at our prison (by both offenders and staff) and put them in one place, you could probably have enough to poison a small town in North Dakota. Maybe even Iowa.

I see enough Thorazine and Lithium and Haldol and Valporic Acid being passed out every day that you could probably build a new prison out of the drugs inside of a year.

And the inmates take even more than that.

But I know of many many staff members (especially the ones who have been around for awhile) who are on a buttload of medications. Some of them are battling injuries or diseases (or just life itself) and some are just trying to get through the day on an even keel.

I'm not saying all of the staff here go around stoned all day. Far from it. If I knew of a staff member who was not in their right mind one way or the other, I would either send them home or report them to be sent home. I've done both in the past. I've seen a few "steady" types who had bad reactions to their meds and had to be sent home to straighten back out again. It happens. I'm not going to work around someone who is messed up and not thinking clearly. I don't have a death wish.

Working in a prison can be a very stressful and often depressing job. Depressing because you know that, for the most part, you will have accomplished nothing by the end of the day except that nobody got hurt and nobody escaped. I view that as an accomplishment in the plus category every day. Keeps me sane.

But alot of staff members need more than that sometimes. If I could get the franchise on the antidepressants for prison staff, even in just this state, I could retire early a very wealthy man. When I was going through a very stressful period a few years ago, my doctor put me on something (I don't remember what it was) but it was too strong and I was worried that I may not be able to react in time if I was on it, so I dropped it and dealt with my stress in different ways. One thing that helped was hanging an 80 lb punching bag from the tree in the back yard. Many nights I would come home and be out there at 10:30 punching the bag in the dark. My knuckles were bruised, but it made my head feel better.

I still do have a scrip standing by for the nights when I can't "unwind" and get to sleep. Some nights I come home with my head so full of b.s. and irritation that I can't relax. But I'm trying to use that one sparingly.

And the blogging helps alot, too. I'm surprised there aren't more C.O.'s doing it.

If I wasn't able to find the humor in most of the situations I encounter, I don't think I would have lasted as long as I have at this job.

Having a good (if twisted) sense of humor is much better than taking drugs. In my book, anyway.