A Day In The Life Of Yesterday 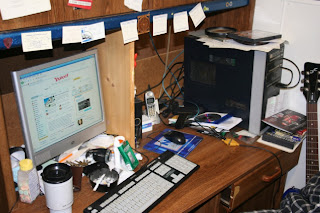 7:45am Rolled out of bed, got dressed in my sweats and wandered into the kitchen for some coffee. Blinked sleepily at the wife, petted the dogs and sat down at the puter for some quality wakin'-up time.

7:50am to 11:00am Drank coffee, smoked, took my sinus pills and my anti-inflamatories. Read and replied to emails, read the comics and the news and caught up on all the weirdness in the world. Ate a poptart. Played and won a game of "Risk".

11:00am Got my shoes on and walked a mile on the treadmill. Worked out with the hand weights while I walked. Listened to Moon Martin and Tom Weitz on my mp3 player.

11:30am Got off the treadmill. Sat down to burn a disk for FM and played tetris while it was burning the disk.

12:00pm Went and took a shower. Got into my uniform and packed my lunch. Sat down to play another game of "Risk". Got beaten that time. Pfui.

1:30pm Arrived at work, got my radio and my cuff keys and headed on down to the house.

1:45pm Got to the house. Realized we weren't going to get a round of rec out, so went and did other things. Pulled inmates out for the parole guy. Counted and accounted for all of the suicide smocks and blankets. Assisted with a few lockups. Searched some property. Went out and smoked with the day shift sergeant.

3:15pm My crew shows up. Food service workers show up. I go count the house. The nurse shows up, we do some med pass.

3:45pm Start feeding the house. A little knucklehead called TNT (he's as loud as dynamite, but twice as stupid) tries to reject his food tray. He says he doesn't want it, he wants a sack lunch. I don't blame him. Chili-mac. Ugh. I tell him he's beat. He claims he's a vegetarian. I tell him he's beat again. He's only a vegetarian when it's something he doesn't like. If it was hamburgers, he'd be begging for extras.

4:15pm We see TNT trying to break out the grill on the bottom of his cell door with his food tray. We go in ready to hose him down. He cuffs up, we get the tray back and search his cell. He's belligerent and darkly threatening the whole time. We get back out of the cell with no incident. Continue on getting the trays back from the rest of the house.

6:15pm Finally manage to get a round of rec out to the yard. TNT has covered his cell window with toilet paper and is systematically tearing everything in his cell into little pieces. He rubs soap all over the floor in front of his cell door and splashed water on it to make it slippery in case we come in on him. Looks like he's trying to sharpen the handle of his toothbrush on the wall.

7:15pm Get another round of rec out. TNT is flooding his cell. GM comes in the wing and shuts his water off. TNT punches and beats on his window and tries to kick the toilet loose from the wall. GM and MJ trot into the wing and tell him he will get sprayed if he doesn't stop. He doesn't reply, but he stops, which is good enough.

8:30pm Get the last round of rec out for the evening. TNT has gotten tired and lays down for a nap. Pretty much uneventful for a few moments.

9:15pm Thunderstorm rolls in. Have to bring rec in early. Some of the offenders complain. I say "You want to stand out in a metal cage in a thunderstorm...... you really are an idiot, aren't you?"

9:30pm Get all of the files done for rec and go read TNT his violation for trying to break his cell door. He refuses to listen and screams obscenities at the top of his lungs the whole time. Sarge and I laugh all the way out of the wing. He is so stupid.

10:05pm Get home and change back into my sweats. Take my meds. Play a little "Resident Evil 4" on the wii. Check my email.

And that's pretty much how it goes most days.
Posted by JustRex at 10:07 AM