Was That Really Necessary? 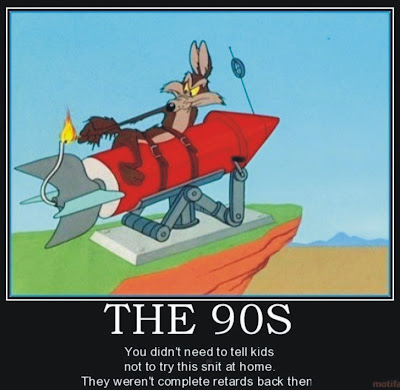 When I first got to work Sgt Bumble Bee had the chrono and he look up at me and said "The Hive." I rolled my eyes and snorted and said "Aw, really?" When I went downstairs and then came back up Lt Wyatt called me over and said "Change of plans. You were down there last time. I'll send Sgt Moon tonight instead."

He was probably thinking Moon would cause him less paperwork.

But it was cool. I got to go to my house.

So when I got there Sgt Loompa had some papers printed out for me to look at. New stuff that had just come out. One of which was the new policy on security cameras. I'd planned on giving it a glance when I got some free time.

On one of his breaks Tilt came in and picked up the policy and was flipping through it and at one point he snorted and said "This is ridiculous. Look at this!" He pointed to a short paragraph.

It said "Using the security cameras to sexually excite or gratify yourself or another is strictly forbidden and will be considered sexual harassment."

Or something along those lines.

I remember some of the stuff I have seen on those security cameras. I work in a prison, remember? Nast-O-Rama!

Tilt and I had a long discussion on why they thought that this paragraph should even be included in policy. We came to the inevitable conclusion that someone somewhere must have done something really stupid or yucky or both at one point or another to make that necessary.

Then there was that slow sigh and shake of the head......

There are idiots everywhere, it seems.

Later on I was going to make a point about that in a discussion and I went back to read that certain paragraph and I noticed a glaring typo that almost made me bite my tongue off. But I did cackle aloud.

I corrected it when I first quoted it above. It actually said:

"Using the security cameras to sexually excite or gratify yourself or amother is strictly forbidden and will be considered sexual harassment."

That, of course, made Tilt and I laugh so hard we almost fell over. And the inevitable jokes ensued.

So it's okay to excite a father, then? How about a priest? What if her kids are adopted? Does that count as a mother?

Tasteless, I know. But we are prone to juvenile entertainment. And I think Miz Slim And Miz Contrary were ready to slap us both by the time the night was over.

You gotta have fun sometimes or you'll go crazy. Especially in this place. And we take our fun where we can find it.

Saturday is going to be No Housework Day, International Beaver Day (not going there..), International Pillow Fight Day, National Beer Day, Tangible Karma Day (what the....?) and Coffee Cake Day.

Mmmm.... My Mom used to make the best coffee cake.... Baking doesn't count as housework, does it?
Posted by JustRex at 12:27 AM