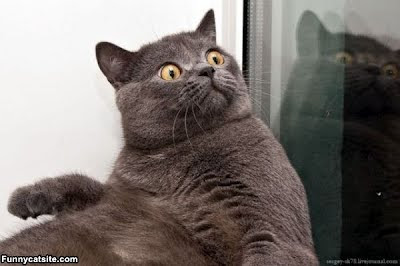 Just hanging out down in the wobblehead house tonight. On my Friday.

Thought about taking off early but we weren't out of coffee yet so I decided to stay.

Miz Avon Was out doing a wing walk and we could see her talking to one of the offenders and he was showing her something in a notepad. Miz Cackles sees that and says "Oh Gawd, he's written another story and he wants her to read it! Oh gawd! They're horrible!"

Sure enough, he had written another story. And Miz Avon is too nice to tell him to his face that they suck so she says she'll read it and bring it back. So she brings it up into the bubble and starts reading it out loud to us.

And yeah..... It was pretty freaking bad.

Even considering it was written by a wobblehead.

The upscut of the tale was about a woman who gave birth to a baby girl that looked just like a cat. Even down to having a tail.

Anyway, Miz Avon is reading along and she says "Her dousher looked like a cat!"

She reads the line again. "Her dousher looked like a cat!"

Well, none of us knew what that meant and we spent quite a bit of the remaining evening contriving some rather rough humor about that phrase.

We could have just asked the inmate, but that would have been too easy.

When I got home I told the story to my wife she immediately said "I'm sure he was trying to say daughter."

Of course if we had thought of that right away we wouldn't have had anywhere near as much fun with it as we did.

So here's the weekend lineup:
Wednesday is going to be: My Bucket's Got A Hole In It Day, Loomis Day and National Mint Julep Day.

Thursday will be National Macaroon Day, Hug Your Cat Day and What You Think Upon Grows Day.

My bucket just has a hole at the top, thank you.
Posted by JustRex at 12:13 AM