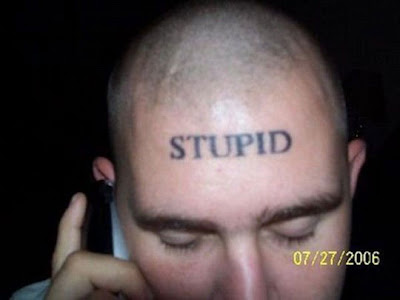 I wish I had a rubber stamp with tattoo needles in it.  That looked just like the picture above.

There was a story come out of one of the other local prisons the other day that I thought I would share with you all.

A rather foolish young man (as so many of them tend to be) found himself in prison and decided that he should join one of the white supremacist gangs.  Whether because he actually believed in the garbage they sell or for his own protection I suppose we will never know.  Frankly, I don't really care what his motivations were.

As many of those wanna-be Billy Badaxe types tend to do, he got himself thrown into the Adseg unit.  The Hole.  For whatever reason.  Either his own protection or because he was just an idiot or whatever.

Once again, who cares?

At any rate, he discovered that his cellie was much smaller than him and started picking on him and bullying him and stealing his food.  Because he was big and the cellie was small.

Then he found out that his cellie was locked up for tattooing.  And he got this marvelous idea.  He would get a tat gun smuggled into the Adseg unit and he would have his cellie put the white supremacist gang tattoo on his back for him!  What a marvelous idea!

Can you see where this is going?

By the time the guy was done there were two tats on his back.  The first one in small cursive letters read "Tied to Texas T" and the date.  Now just in case you were wondering, this tat identified this punk as a "baby" in prison slang.  Somebody's homosexual play toy.

The second tat in big three inch letters said "I'M A CHOMO"...  Which in prison slang identifies him as a child molester.

This fool is now marked for life.  Oh sure, he'll find someone kind enough to mark over it some day.  On the outside some tatter might take pity on him and cover it up.  But I doubt it.  I'd hazard a guess and say that 99% of the people he approaches to do the cover up work are going to take one look at that ink on his back and say "Nah.  I don't think I want to do any work on you.  As a matter of fact, just get the snap out of my place.  Now."

I'm sure the lessons learned here are pretty obvious.

1.  Don't piss of the guy doing the tattoo work on your back.